By Murray Griffin
May 21, 2016
​
BASS Coast Shire has become one of Australia's first councils to use carbon credits and the federal Emissions Reduction Fund to help reduce the costs to ratepayers of providing waste management services.

It might also use carbon credits to help reduce the costs of next year's planned expansion of its household waste collection service to include food and garden waste.

Bass Coast Shire will earn the credits by capturing methane from its Grantville landfill and flaring it. Methane is an extremely powerful greenhouse gas (21 times stronger than carbon dioxide) and flaring converts it to less harmful carbon dioxide.

The shire first had to get its landfill gas project approved by the Clean Energy Regulator, which checks that the correct procedures are being followed and that capture rates are being properly monitored and reported.

Then, at last month's federal government-run Emissions Reduction Fund (ERF) auction, it earned the right to sell those credits to the federal government, becoming one of only nine councils that have so far won ERF contracts.

The shire's ERF contract is for the sale of 44,540 credits over seven years. The council isn't allowed to disclose the actual contract price, but the average ERF auction price was $10.23 per credit, meaning the contract will provide Bass Coast with a useful revenue stream to help cover the costs of remediating the landfill to meet EPA Victoria standards.

Although the ERF has its fans and its critics, the underlying procedure of earning carbon credits from projects that cut greenhouse gas emissions and then selling them is accepted by all major parties.

The council is currently evaluating tenders for the provision of a household food waste and garden waste collection service, which would augment the existing two-bin rubbish and recyclables system. Council is likely to make a decision on the tender in July, and the new three-bin service could start in September next year, Ms Griepsma said.

Although several Victorian councils already have a three-bin system that includes collection of food waste, the move will make Bass Coast Shire the first in Gippsland to introduce it, she said.

Diverting food and green waste from landfill altogether can result in significant reductions in greenhouse gas emissions, and Griepsma said the shire is open to the prospect of earning credits from its new three-bin system and then selling them to help reduce its waste management costs.

COMMENTS
A scientist, an economist and a psychologist will tackle the big questions on climate change at a Wonthaggi forum next week.

Locals step out for the environment 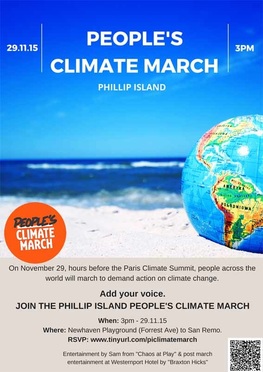 BASS Coast will be well represented at the People’s Climate March in Melbourne on Friday, November 27, with the council partnering with Groundswell Bass Coast to promote the march.

With world leaders to meet in Paris for the UN Climate Change Conference, people in cities all over the world will come together to call for a transition to 100 per cent clean energy and an end to fossil fuels.

“If we don’t do something soon, the costs from the implications of climate change to the council will be huge; we’re at a tipping point now. Council also understands the potential benefits of embracing renewable energy."

Groundswell member Aileen Vening said that with Australia creating more greenhouse gases per capita than any other country, Australia must agree to more ambitious targets at the UN climate talks in Paris. Individuals could also play their part.

“Measures such as installing insulation, blinds and more efficient appliances are creating jobs and reducing energy use. Around 1.4 million households (one in 10) have installed rooftop solar panels and are enjoying reduced electricity bills. Our air is cleaner because less coal is being burned.

Ms Vening said the march would send a message to Australian leaders that effective action was required urgently.

Finger-pointing won't hold back the tide

April 26, 2014 - Instead of railing against the council’s coastal inundation forecasts, perhaps landowners should be demanding government action on climate change, suggests Michael Whelan.

‘The Australian people will judge’

July 26, 2014 – The problem with the carbon tax, writes Greg Hunt, is that it didn’t work. The Environment Minister and Flinders MP answers his critics.

July 18, 2014 - He was acting at the behest of the Prime Minister but it is Greg Hunt who will be remembered as the environment minister who destroyed Australia’s climate policy, writes Michael Whelan.

The Coalition claimed its Direct Action plan would absorb 15 million tonnes of CO2 a year. BERNIE MCCOMB did the sums and found a $74.5 billion hole in the argument.

To sum up, it's just hot air

Mr Hunt wrote his Direct Action Plan on carbon reduction in 2008, with a few updates in 2010. On Page 18 he stated, "Based on industry estimates, the planting of 20 million trees will require approximately 200 to 400 square kilometres of land area depending on the intensity, and can be delivered at a cost of around $5 per tree.”

On January 14 2010, Opposition Leader Tony Abbott announced the creation of the Green Army. The stated objective was to plant enough forest to absorb 15 million tonnes of CO2 a year by 2020.

According to Australia’s Chief Scientist, forests absorb CO2 at 0.5-2 tonnes per hectare per year. Taking a mid-value of 1 tonne, this means an area of 15 million hectares – 150,000 square kilometres – would need to be planted at 1000 trees per hectare to absorb 15 million tonnes of CO2. That’s 15 billion trees.

Direct  Action claimed 20 million trees at $5 per tree, amounting to $100 million, but the summary on Page 31 allocates just $50 million. That’s a small $50 million mistake. But at $5 for each of the 15 billion trees actually required to absorb 15 million tonnes of CO2 a year, it’s a $74.5 billion whopper of a mistake.

If the real plan is not to absorb 15 million tonnes a year but to work with just 20 million trees, this means absorbing only 20,000 tonnes of CO2 a year. The plan budgets $100 million for this exercise, which works out to a return of $5000 for every tonne of CO2 absorbed!

That’s only a small proportion of Australia’s greenhouse gas emissions of around 630 million tonnes a year, or around 27 tonnes of CO2 per person a year (the highest in the world). By the time the massive new Galilee Basin is exporting coal from Abbott Point in the Great Barrier Reef, including liability for emissions from this coal, our score will be close to 100 tonnes per person.

In his book Sustainable Energy – Without the Hot Air, David JC MacKay, professor in the department of physics at the University of Cambridge, states: “The best plants in Europe capture carbon at a rate of roughly 10 tons of dry wood per hectare per year – equivalent to about 15 tons of CO2 per hectare per year – so to fix a European’s output of 11 tons of CO2 per year we need 7500 square metres of forest per person. This required area is twice the area of Britain per person. And then you’d have to find somewhere to permanently store 7.5 tons of wood per person per year! At a density of 500 kilograms per square metre, each person’s wood would occupy 15 cubic metres per year. A lifetime’s wood – which, remember, must be safely stored away and never burned – would occupy 1000 cubic metres. That’s five times the entire volume of a typical house. If anyone proposes using trees to undo climate change, they need to realise that country-sized facilities are required. I don’t see how it could ever work.”

With Australian emissions three to 10 times higher per person, the whole Green Army and forest solution is nothing more than a distraction. No wonder the Coalition didn't submit its costings to Treasury well before the election.

Sometimes every little helps. At other times, every little just gets headline news, causing confusion and worsening the problem. Finally, why call 15,000 young tree planting conscripts an Army? Who's the war against this time?