The joys of cycling

The opportunities also exist to participate as a Bug member in the local primary school bike education programs and as marshals on competitive rides in our region.

The view from the other side 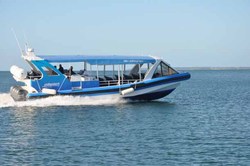 THE brand-new 47-seat ‘sea sprinter’ pushes back from Cowes Jetty and is soon speeding westward towards Australia’s largest seal colony.  I’m on board Phillip Island Nature Parks’ Ecoboat Tour.  The monitor at the front of the boat shows we’re travelling at 27 knots but the sea is calm and the ride is smooth.

The boat hugs close to the northern coast of Phillip Island.  I have walked most of the island’s coast but this is a whole new perspective, observing the sandy beaches, rocky outcrops, cliffs and dunes from the water instead of the land.

There is something fascinating about looking inward at the coast.  It gives a sense of how people live.  The upturned ‘tinnies’ tucked beneath the tea-tree at the back of a beach, hundreds of recent plantings by local volunteers, homes on cliff-tops taking in the view.

The boat slows to a stop at McHaffie Reef and Grossard Point where our ranger guide
Cara explains how these places were named for their links to the early European settlement of Phillip Island.  Unexpectedly, a seal pops its head out of the water
just a few metres from us.
Linda Cuttriss travelled on the ecoboat tour courtesy of Phillip Island Nature Parks.

On the right track

These days it’s hard to find copies of the booklet – perhaps it’s time for a reprinting.

So much has changed – much of it for the better – since the booklet was produced. Back then you needed secateurs to do some of the walks and bike rides.

These days, the tracks are popular commuting routes used by hundreds of people every day. Away from busy roads, they come into their own during holiday periods when car parking in town is in short supply.

If you enjoy these tracks, it’s easy to do your bit by picking up one piece of rubbish and/or pulling out one weed along the way. 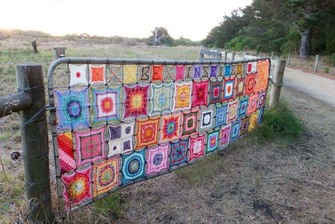 IT APPEARED gradually, and always at night, or at least when no one was around. Square by crocheted square, it was secured to the iron gate.

Sometimes there was a spurt of activity and several squares would appear overnight, then there would be a gap of days or weeks until the next one.

Finally, it is finished and can be seen in all its gloriousness.

“Be Inspired”, the artist has called it. It is lovely in any light but perhaps loveliest in the late afternoon with the sun backlighting it.

We’ve seen examples of the unknown artist’s work around Wonthaggi before but you’d have to say this is her – or his – masterpiece, the Starry Night of the world of crochet.

If the word “crochet” makes you think of haphazard bedspreads made of left-over wool, forget it: this is a carefully planned and sophisticated work of art.

I wonder if it’s the work of one person or whether s/he works in a nursing home or hostel with plenty of  willing hands.

And what’s the significance of putting it in a place where so few people will see it? Sure, scores of people walk or bike the Wonthaggi-Kilcunda rail trail each day, but what about the hundreds and thousands who don’t?

The artist must have considered the matter deeply. Was it simply to avoid the vandals who would have attacked it in a more prominent location?

Is the rail trail or the rescue station a significant site to the unknown crocheter?

Or is obscurity his/her preferred mode?

I think of Banksy, the British street artist, whose famousness is rooted in the fact that we don’t know who he or she is, or where his/her works will next appear.

I also think of “Mr Eternity”, the Sydney man who got up early in the morning for 35 years to chalk the word "Eternity" on city streets and footpaths. People saw the word but not the man and so the legend grew.

The Sydney City Council asked the police to detect the offender and bring the full might of the law to bear on this serious case of the defacing of the city’s footpaths. Each time the former alcoholic and born-again Christian was caught, he allegedly responded, "But I had permission from a higher source".

Today there is a civic monument to Mr Eternity and having your wall defaced by Banksy is like winning Tattslotto.

Be Inspired is a few minutes’ walk from the Wonthaggi-Kilcunda rail trail car park in South Dudley Road.  It's worth the walk.

We also find several species of fungi and the bird observers in the group accumulate a respectable list of bird species as well.

Local resident Liz McDonald is on hand to point out various items of interest and then bravely invites us all to eat our packed lunches at her place, where a wayward wandering whipbird gatecrashes the proceedings and provides a suitable climax to a very enjoyable and productive day.  Spots of rain begin to fall as we say our farewells and set off for home. 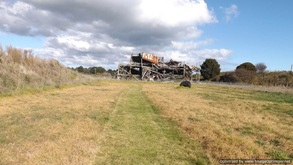 OFFICIALLY it’s called the Number 5 Brace Loop Track but I know it as the big sky walk.

The track is a mowed width of grass you barely notice as you walk because it leads directly to the tumbling down pile of rusted tin and timber that was once at the heart of Wonthaggi’s west area coal mine operations.

Your eye is drawn to the fascinating contortions of the No 5 Brace building’s decline. If the wind is blowing you’ll hear the rasping sound of rusted tin rubbing against rusted girder.

With all the attention this wreck gets, you risk missing one of the track’s best features, its generous views of the sky above.

How a miner must have relished that sky as he emerged at the end of another underground shift.

Even with the unceasing industry and bustle on the site there was air and the vast sky to revive a man.
In spring, summer and early autumn the mowed track is edged by grasses that move en masse in a breeze and hold their seedy heads high.

There are weedy, neglected tracts to right and left and elderly fruit trees with spread out canopies.  Foxes cross the track to lurk in the pines, which drop stumpy half limbs and lots of cones.

We can look at this as abandonment of the industrial past or as a living example of the inevitable from which to learn.

Either way the sky remains.

The Wonthaggi No. 5 Brace Loop Track (about 1.5km), is one of five walks through the historic west and central area mining reserve. It is bounded by the Wonthaggi-Kilcunda Rail Trail on one side and a car park off the West Area Road on the other. All tracks are clearly marked at the car park end. 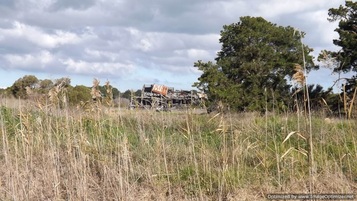 Meanwhile, at the Bass op shop, I wish I was a grandmother. The dedicated kids’ room, with its amazing array of well-preserved children’s clothing, shoes, toys and bedding for babies, toddlers and preschoolers is very tempting. There is even a teenagers’ department.

Wander into one of the home wares rooms and look up, if you can tear your eyes away from the plush, soft toys and knick-knacks for a moment, to find some truly bad art (highly collectable in some circles), framed mementos, and  a wonder of other homemade and original wall decorations.

Out in the garage there are oddments of all kinds: a massive whipper snipper, 35-year-old office stationery, a bag of books for $1, and a practical wire basket for fresh eggs.

Make sure you leave time to really appreciate the building, inside and out: the brick chimney and sash windows, the small side rooms and short hallways of the original weatherboard cottage.

A sign out front tells you that all the money raised supports Bass child care and home care services and helps with upkeep of the building.

If you need anything, almost anything at all, or you just want to trawl through stuff, head to the Bass Opportunity Shop between 9am and 2pm from Monday to Saturday.

Don’t be put off by the road works. Take the Bass township exit, go past the pub and over the bridge and you’ll see it.

Lycra lad or dork, it's a dream ride

The stretch between the Dalyston footbridge and the Mouth of the Powlett Road used to be a god-forsaken grind. These days, thanks to plantings by local schoolchildren and conservation workers, it’s a half-grown glade, offering at least some protection from the south-westerlies. A few more years and it’s going to be sublime biking through here.

The kangaroos are still there, scores of them, just past the Lower Powlett River Road. If you’re lucky, one will lazily lollop across the trail in front of you.

And the sudden view of the Kilcunda beach, as you reach the top of the rise behind the cemetery, still makes the heart lift. Impossible at this point not to feel blessed to be alive.

Here you have a choice: head straight back or dally a while and watch the surfers and fisherpeople at Kilcunda. Head up to the pub or cafe, or head another few kilometres up to Anderson.

On your return, you sometimes strike it lucky. Timing plays a part. The early mornings are usually still but at about 10am a south-westerly often starts up and you’ll sail, spinnakers full, all the way back to the start at the South Dudley Road. If you’re really lucky, on the way you’ll pass a lycra lad tacking into the breeze. This is the one occasion when you get to beat the natural laws of biking: for every tail wind there's a head wind; for every downhill there's an uphill.

Back at the start, I face the last straw, a three-kilometre uphill ride to get home. At this point I always wish I’d put the bike in the boot of the car and driven here. But that would be to forego the joyous downhill swoop from home to here, when for five minutes I understand what it’s like to be Lance Armstrong after a shot of something very good.